The Jula Holding Group has previously had ownership in wind power and in several other areas related to energy efficiency and the environment. These operations are now incorporated in the new group company Jula Energi & Miljö. 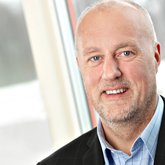